Professor Jonathan Gratch "A Window into Your Soul? Promises and Pitfalls of Automatic Facial Expression Analysis"

Please Join us for the 17th Annual Bradac Memorial Lecture

Affective computing is exploding in both commercial and scientific interest, but also in controversy. Companies offer to classify if someone is happy or sad from a snippet of audio or video, and use these inferences to predict fraud, consumer purchases, or mental well-being.  Some say it’s a dangerous, invasive technology that will undermine privacy and individual freedoms. To others, it’s “AI snake oil” with no basis in science.  This talk reviews findings from a recent commercial survey on the ways emotion recognition technology is marketed, and discusses the scientific basis, or lack thereof, for marketers’ claims. It then reviews our lab’s research on the ways emotional expressions can reveal mental states, help predict future behavior, and guide the design of computer-based agents that shape human behavior through their own emotion displays, establish rapport, and promote self-disclosure. These findings emphasize the contextual nature of emotional displays and the ways context is often ignored from many proposed uses of automatic expression recognition. It concludes with prospects and challenges for the future of affective computing.

Jonathan Gratch is a Research Full Professor of Computer Science, Psychology, and Media Arts and Practice at the University of Southern California (USC), and Director for Virtual Human Research at USC’s Institute for Creative Technologies. With his Ph.D. in Computer Science from the University of Illinois in Urbana-Champaign in 1995, his research focuses on computational models of human cognitive and social processes, especially emotion, in ways that advance psychological theory and human-machine interaction. He is the founding Editor of IEEE’s Transactions on Affective Computing, founding Associate Editor of Affective Science, Associate Editor of Emotion Review and the Journal of Autonomous Agents and Multiagent Systems. A former President of the Association for the Advancement of Affective Computing, he is a Fellow of AAAI and the Cognitive Science Society, and a SIGART Autonomous Agents Award recipient. 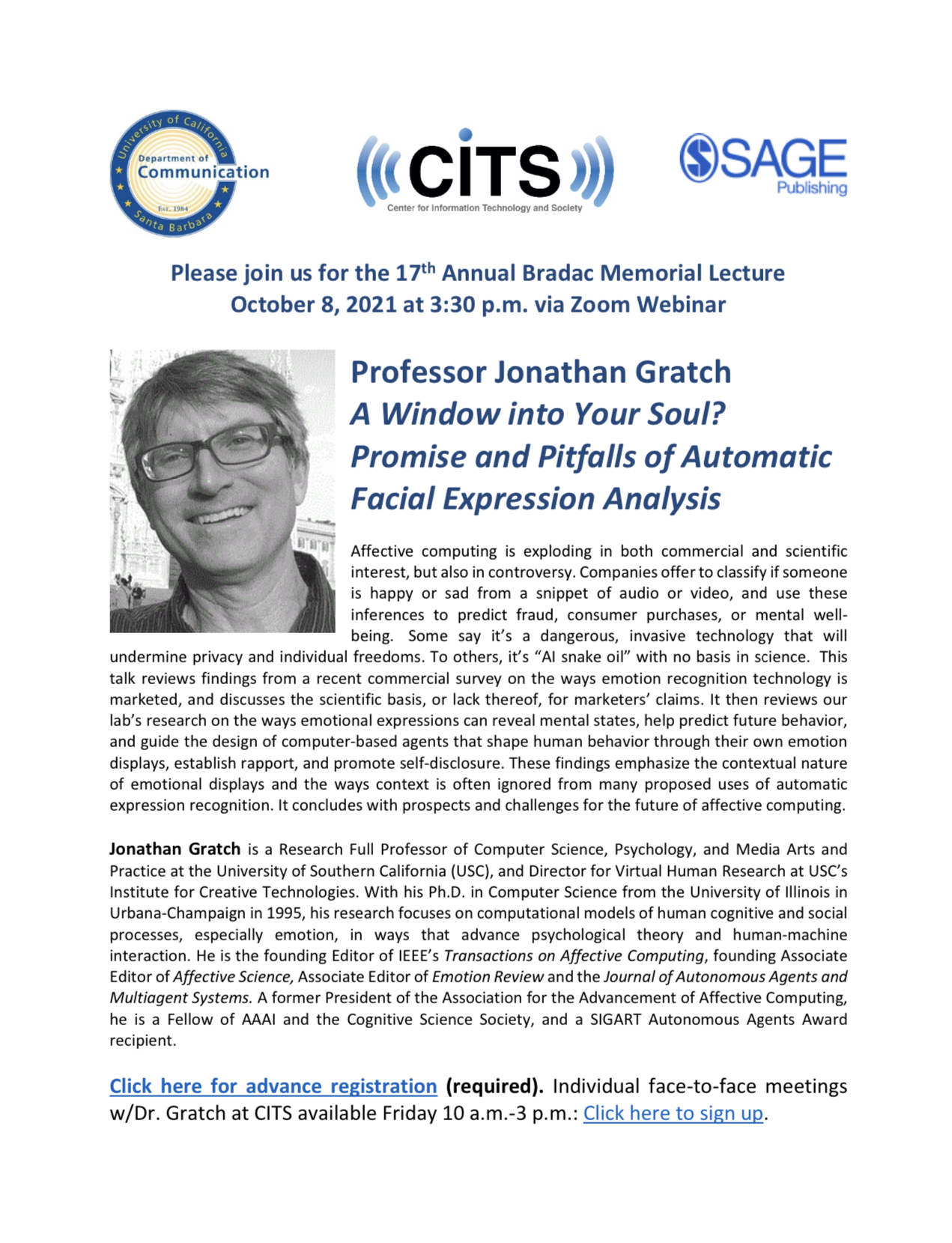