Accompanying the increasing amount of fake news and misinformation online, there are numerous platforms on the web for authentication, verification, or fact-checking the truthfulness of news stories. The systems themselves are very useful. The limitations in their effectiveness in helping dispel fake news seem to come from their being under-used, and the section of our website on cognitive biases explains a lot about why people don’t take advantage of fact-checking systems. Nevertheless, many efforts have in fact been made and strategies have developed to assist us in distinguishing false information from the truth.

We can easily turn to reputable news media outlets that produce fact-check reports on a regular basis. Fact-checking reports have recently increased in the major news outlets, such as the Washington Post, New York Times, and CNN. They can be used to monitor or verify statements made by the politicians. Some researchers suggest that simply knowing that such tools exist constrains on politicians from making false claims, and pressures them to make statements more cautiously. Most fact-checking news agencies contact politicians to clarify or correct their inaccurate statements (although President Trump never directly responded to these inquiries [1]).

Other fact-checking sites are independent from traditional news media outlets, and are solely dedicated to professional fact-check services. Politifact, for example, rates statements as “True,” “Mostly True,” “Half True,” “Mostly False,” and “False.” Such sites are selective in terms of what statements to verify based on whether the statements are newsworthy and are rooted in facts that are verifiable.

Other fact-checking sites focus on providing additional information and context to politicians’ statements, to help readers make their own judgments about the validity of those statements. FactCheck.org doesn't rate politicians’ statements by true or false, but rather provides detailed evidence for or against the statements and lets you decide whether they are true or false. You can also submit inquiries directly to the site about various topics including political policies, rulings, and rumors related to other societal issues. FactCheck.org then posts answers to readers’ questions if they are verifiable and fact-based.

Various database resources have become available for news agencies, fact-checking organizations, and policy makers to help effectively address the spread of false information and fake news. CREDBANK, a dataset of tweets, for example, helps researchers who study misinformation by providing credibility annotations. TwitterTrails and RumorLense also help researchers visualize and track the spread of rumors online. The Hoaxy system is also well known for assisting researchers and other experts in tracking how particular misinformation and false contents spread over a social network online. The system works on the basis of the data it has been collecting since June 2016 in relation to the spread of misinformation throughout public Twitter streams.

Despite the presence of a variety of professional fact-checking sites and tools, there still are shortcomings and concerns. The sites may not be as reliable or credible as expected, because of the lack of consistency and coherence among different fact-checking sites. For example, Fact Checker and Politifact rarely check the same statements, and even when they do check the same statements, they often don’t agree with one another [1]. This may confuse people even further and even compel them not to reconsider their preexisting perceptions of a story’s truthfulness.

So when should we check for facts? We don’t expect everybody to verify everything they read. But we strongly recommend that you fact-check before you share, like, or comment on a news item, in social media. It’s important to get into a habit of fact-checking, given the cognitive biases that make us receptive to fake news. When people articulate opinion based on something they claim is real or is a fact, it would be a good idea to check how real it is. You should question the reliability of facts even when people you know and like provided them in their own good faith. Given the diversity of resources, reports, sites, and systems available for us to verify information, it’s also important to spend enough time weighing one information source against another and develop sufficient insight that will assist you in preventing the spread of fake news in the future.

The table, below, shows a number of major fact-checking services, how they operate, and their primary audience. 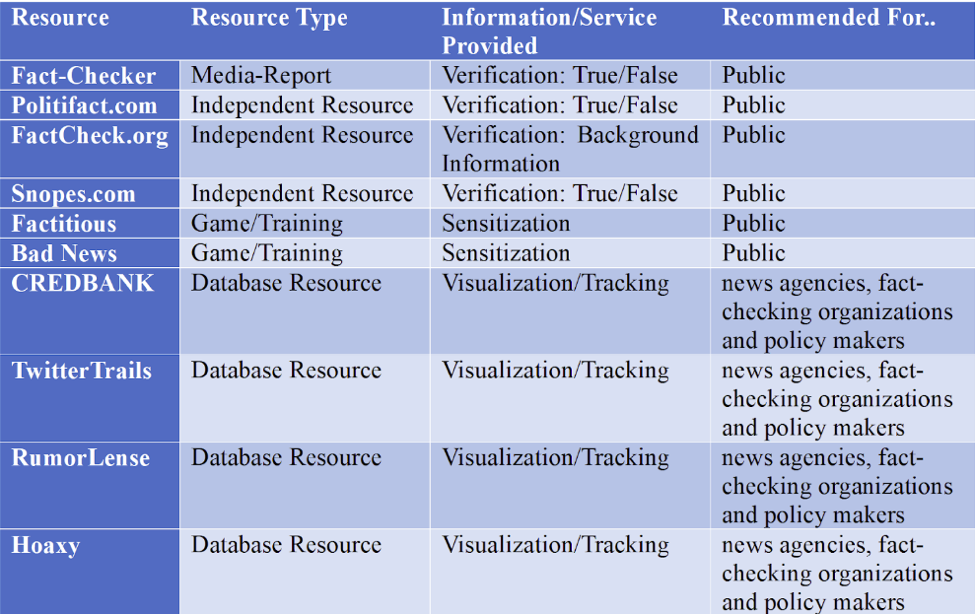